A profile of Millennium episode Sacrament, synopsis, images, credits, related trivia and facts plus the original promotional trailer where available. The episodes follow the original US TV Air Date/DVD box set order which is most familiar to the majority of fans.

In France, this episode was entitled Le Sacrement which translates into English as The Sacrament. [View all]

In Finland, this episode was entitled Paholaisen pihdeissä which translates into English as In the grip of the devil. [View all]

In Germany, this episode was entitled Im Zeichen Luzifers which translates into English as In The Sign Of Lucifer. [View all]

There are a total of 115 images for Sacrament which are available in our Episode Image Gallery. 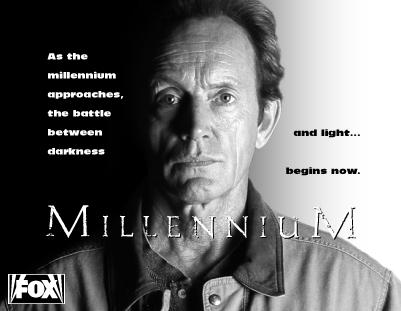 A police search strikes the Black family personally as Frank's sister-in-law, Helen, is kidnapped from her child's baptism. Frank's younger brother, Tom, finds the situation overwhelmingly difficult to deal with emotionally and foolishly chooses to take desperate measures. At home, Jordan exhibits extraordinary concern over the detailed events of the crime despite the fact that she was never present to witness them.

He said to me in a dreadful voice that I had indeed escaped his clutches, but he would capture me still. - St. Teresa of Avila

As the millennium approaches, the battle between darkness and light... begins now.

Please note that this is the original Fox synopsis and occasionally this may differ from the events that were actually filmed. Please also view the Sacrament episode transcript which has been painstakingly checked for accuracy against the actual episode.

Frank's brother, Tom, and his wife, Helen, travel to Seattle where they hold their newborn son's baptism. After the ceremony, Frank checks up on Jordan, who is off playing with a friend inside the church. He finds his daughter huddled in a ball on the pew, clutching herself. She speaks of a man she saw hurting her Aunt Helen. Frank rushes outside the church. He finds his baby nephew unharmed in the back seat of Tom's rental car, but notes a blood droplet on the infant's face. Frank and Tom realize Helen was abducted.

Frank, who saw the back of the kidnapper's head during the baptism service, pores through police mug shots. But he is unable to identify the perpetrator. Bletcher warns Frank he cannot interfere with the police investigation, noting a prosecutor cannot achieve a conviction using evidence gathered by the victim's brother-in-law. But Frank insists he can help find Helen.

Frank notices a baggage tag is missing from one of his brother's suitcases. He and Tom review video footage recorded by a surveillance camera at the airport. They see the kidnapper approach Helen at the baggage carousel. Later, Bletcher tells Frank police located a stolen car. Helen's blood was discovered inside.

Watts gives Frank a manila envelope containing photos of sex offenders living in the area. Frank recognizes the kidnapper, Richard Green, in one of the photographs. Bletcher assures Frank that Green, who lives at home with his parents, is already under surveillance. However, Frank decides not to tell his brother about the discovery.

Tom searches through his brother's files and discovers the truth about Green. Gun in hand, Tom confronts the kidnapper, demanding to know his wife's whereabouts. Green, however, claims he doesn't know anything about Helen. Geibelhouse and Teeple, who were surveying the Green residence, calm Tom. He lowers his weapon. Later, Frank tells his brother he deliberately kept him in the dark because "there are some truths no one should know."

Watts searches the abandoned vehicle and discovers the presence of several pine needles from trees which only grow in Peninsula National Park. Watts, Frank and Tom drive to the park, where they discover an abandoned cabin. Inside they find more blood--along with Helen's wedding ring. Later, police make casts of tire tracks outside the cabin. They match the abandoned car. Lab tests reveal the presence of Green's blood inside the cabin as well.

Meanwhile, Jordan continues running a fever. But doctors are unable to pinpoint the cause. Jordan asks her mother why the man who took her Aunt Helen is making her cry. Catherine is taken completely off-guard by her daughter's remarks.

Green is taken into custody, but Helen's whereabouts remain a mystery. Police begin digging up the lawn behind the Green residence. They discover a woman's decomposed body buried inside a plastic garment bag. Watts tells Frank the wrapping around the body slowed decomposition considerably. He guesses the woman was killed at least nine years earlier.

Frank realizes Green did not murder Helen at the cabin (as he was under surveillance since Sunday night). He also realizes that some tools found in Green's possession were not part of his torture kit. They were, in fact, used to hide Helen's body in the basement of the Green home. Helen is found entombed behind drywall. But her body is still warm,and she is revived. Afterward, Frank realizes Green's father forced his son to procure his victims.

Tom Black: That's the Black family. Try to anticipate the future so you don't have to dwell on the past.

While there are occasional references throughout the series to the fact that Frank Black has a brother or brothers - most notably in "Midnight of the Century" and "Seven and One" - this episode marks the only appearance of one of these blood relations. While there is foreshadowing throughout the first season, "Sacrament" grants viewers the first clear indications that Jordan Black has inherited her father's unusual powers of insight. This theme, and its potential ramifications, would be explored throughout the series. Credit: Brian Dixon, The Millennial Abyss