A Millennium cast profile of Mark Humphrey, listing all episodes and seasons in which Mark Humphrey appeared. The main cast and guest stars of Chris Carter's Millennium have summaries, trivia and biographies where available.

Sorry, there are currently no Millennium related interviews with Mark Humphrey, however we do have many other Cast and Crew interviews which you may find of interest.

This profile has been viewed 6365 times. 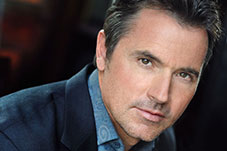 Mark Adrian Humphrey (born December 27, 1960 in Vancouver, British Columbia) is a Canadian actor best known for the role of Jake Antonelli in the Canadian television series E.N.G. In 1988 he made his feature film debut in the film Iron Eagle II as Captain Matt Cooper, Doug Masters' (Jason Gedrick) surviving best friend. Humphrey has been featured in other films and in several television movies. In 2005 he starred in Living With the Enemy with Sarah Lancaster. In 2006 he starred in The Wives He Forgot with Molly Ringwald as a handsome amnesiac. In 2007 he appeared in Still Small Voices with Catherine Bell. Humphrey has also appeared in numerous television series.

In 2009 Humphrey is appearing in the Canadian dramatic series Paradise Falls, the television movies Resistance with Shannen Doherty, and Hostile Makeover with Maggie Lawson, and the feature film Summer Eleven.

Humphrey appeared in the 2005 independent film Cruel But Necessary with his ex-wife Wendel Meldrum and their son Luke Humphrey.

Humphrey was born in Vancouver, British Columbia to parents Jack and Sidney Humphrey. His family relocated to Toronto, Ontario in 1967, where his father, Jack Humphrey, worked as a producer for CBC Radio and Television. After graduating from high school, Humphrey moved to New York City to study acting at the Lee Strasberg Theatre and Film Institute. Humphrey spent five years in New York, later returning to Toronto, and eventually relocating to California.

Humphrey has four siblings. His three brothers, John, Paul, and Andy, are professional musicians. His sister, Lesley, is a former Ford model.

Mark Humphrey was a member of Millennium's cast.

An official website for Mark Humphrey is available at:
http://www.markhumphrey.com

Mark Humphrey has an entry at the Internet Movie Database, available at:
https://www.imdb.com/name/nm0401936/

Sorry, we don't currently have a Wikipedia entry listed for Mark Humphrey.

Sorry, we don't currently have a Facebook page listed for Mark Humphrey.

Mark Humphrey appeared in the following 1 episode/s of Millennium:

MLM#-321 Via Dolorosa as Tommy Marcetti