A Millennium profile listing all episodes and seasons on which Darin Morgan contributed. The main crew members have summaries and biographies where available, and we continue to add and update profile content regulary.

Welcome Frank.
There are 36 days remaining.

This profile has been viewed 9667 times. 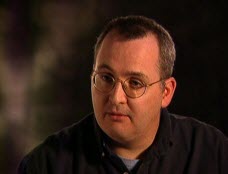 Darin Morgan is an American screenwriter best known for several offbeat, darkly humorous episodes of the television series The X-Files and Millennium. His teleplay for the X-Files episode "Clyde Bruckman's Final Repose" won a 1996 Emmy for Outstanding Individual Achievement in Writing for a Drama Series. He is the younger brother of writer and director Glen Morgan.

Morgan was born in Syracuse, New York and attended the film program at Loyola Marymount University, where he co-wrote a six-minute short film that led to a three-picture deal with TriStar. Morgan subsequently wrote a number of unproduced screenplays and appeared in two small guest roles on The Commish and 21 Jump Street, where his brother Glen was a writer.

In 1994, Morgan was cast as the Flukeman, a mutated flukeworm the size of a human being, in a second-season episode of The X-Files. (Glen Morgan had joined the show a year before as a writer and producer during the show's first season.) The role required Morgan to wear a cumbersome rubber suit for twenty hours at a stretch, an experience that he has since described as "terrible, just horrible." His appearance in "The Host", which originally aired on September 23, 1994, was followed by an offer for Morgan to write an episode of the series. This episode, "Blood", aired on September 30, 1994, and was Morgan's first story credit, although the teleplay was credited to Glen Morgan and James Wong.

Shortly thereafter, Morgan became a full-time staff writer for The X-Files, where he wrote his first solo episode, "Humbug" (originally aired on March 31, 1995). A quirky, funny, sometimes gruesome story about a series of murders in a colony of circus freaks, "Humbug" is usually considered a landmark episode in the history of The X-Files for broadening the tone and style of the famously dark series into funnier, less predictable directions. It was nominated for a 1996 Edgar award.

Morgan's next episode, "Clyde Bruckman's Final Repose", originally aired on October 13, 1995. "Clyde Bruckman" remains a favorite of fans and critics alike, and was acclaimed for retaining the humorous spirit of "Humbug" while extending its story into darker, more poignant territory. Both Morgan and actor Peter Boyle, who played the depressed psychic Clyde Bruckman, won Emmy awards for this episode.

Morgan wrote two additional episodes of The X-Files, the absurdist cockroach invasion story "War of the Coprophages" (originally aired on January 5, 1996) and the famously convoluted "Jose Chung's From Outer Space" (April 12, 1996), as well as contributing an uncredited rewrite to "Quagmire" (May 3, 1996). He left the show after the third season, but joined the writing staff of Millennium, writing and directing two episodes with extremely layered plots and humorous dialogue: "Jose Chung's Doomsday Defense" (which revived the character of author Jose Chung, played by Charles Nelson Reilly, and was originally aired on November 21, 1997) and "Somehow Satan Got Behind Me" (May 1, 1998).

In addition to his work as a writer, Morgan contributed a substantial guest appearance to the X-Files episode "Small Potatoes" (April 20, 1997), where he played Eddie Van Blundht, a self-described "loser" with the ability to shape-shift. He also had a small cameo in the movie The One.

On August 11, 2004, it was announced that Morgan and Sam Hamm, the co-screenwriter of Batman and Batman Returns, were writing an untitled screenplay under development by DreamWorks SKG. According to the Hollywood Reporter, the story "concerns a marriage counselor, whose daughter is about to get married, who discovers that his future son-in-law is suffering from the delusion that he's a superhero."

Morgan worked on the second episode of former "X-Files" producer Frank Spotnitz's Kolchak: The Night Stalker remake, as consulting producer, though the show was canceled before any Morgan-written scripts were produced. The one script that Morgan wrote before the show was canceled was called "The M Word". It concerned a serial killer and a were-lizard, who may or may not be one and the same. It is available as a pdf on the second disc of the DVD set.

Episodes of The X-Files written by Morgan contained numerous in-jokes and references.

The name of the title character in "Clyde Bruckman's Final Repose" is an homage to a silent film screenwriter and director who worked on famous films of Laurel and Hardy (Scully watches one in the episode), Buster Keaton (a hotel in the episode is named after Keaton's boat) and Harold Lloyd, who was Morgan's main influence.Like the real Clyde Bruckman, the character committed suicide.

There are also characters named after other luminaries of silent films, such as Eddie Cline, Jean C. Havez, and "Claude Dukenfield" — the real name of W. C. Fields, who appeared in many of Clyde Bruckman's films. The episode's Bruckman, a psychic played by Peter Boyle, holds up a blue piece of cloth and asks if it's from Mulder's New York Knicks T-shirt, making humorous reference to an episode from The X-Files' first season, "Beyond the Sea", which was co-written by Morgan's brother Glen Morgan. "The Stupendous Yappi" character is a reference to Jaap (pronounced "Yaap") Broeker, who plays the part but was ordinarily David Duchovny's stand-in for blocking and lighting.

Morgan's episode "War of the Coprophages", about the hysteria that grips a town invaded by cockroaches, is inspired by H. G. Wells' The War of the Worlds. The setting (Miller's Grove, Massachusetts) is a reversal of the setting of Orson Welles' radio drama (Grover's Mill, New Jersey) which caused similar real life hysteria.

This episode also makes a humorous allusion back to a notorious scene in Humbug, in which Scully appears to eat a cricket to imitate a carnival geek, when, in the convenience store, a spilled box of candy is mistaken for roaches and she proceeds to bend down and eat one.

The name of the title character in "Jose Chung's From Outer Space" was originated in a practical joke by the X-Files writing staff, where writers would impersonate a nonexistent man called Jose Chung who called the production offices to inquire about an unsolicited script he had submitted, always being turned away (The X-Files did not accept submissions from people outside the writing staff).

The subterranean alien being "Lord Kinbote" in the episode shares his name with the main character in Vladimir Nabokov's Pale Fire, who misinterprets things similarly to the characters in the episode. The fictional setting of Klass County, Washington is a reference to well known UFO debunker Philip J. Klass. Alex Trebek appears in "Jose Chung's" as a man in black (along with Jesse Ventura, who ironically voices a quote from Klass: "No single object has been misinterpreted as a 'flying saucer' more often than the planet Venus"). Trebek's appearance was a possible reference to Duchovny's recent appearance on Celebrity Jeopardy!, hosted by Trebek, where he had lost; Duchovny's wrong answers to questions were also incorporated into X-Files shows.

Additional references by Morgan in "Jose Chung's" include Star Wars (which the opening shot parodies), The Cabinet of Dr. Caligari and The Manchurian Candidate (which are merged to form the name of one of Chung's books), and rock musician and alien believer Roky Erickson. A character in the episode is also wearing a T-shirt for Space: Above and Beyond, the show started by his brother Glen Morgan with James Wong.

However, the town of sideshow freaks where Morgan set his episode "Humbug", actually exists (Gibsonton, Florida). The scene in the hall of mirrors is a reference to Orson Welles' film The Lady from Shanghai.

Darin Morgan was a member of the Millennium crew.

Darin Morgan has an entry at the Internet Movie Database, available at:
https://www.imdb.com/name/nm0604587/

Darin Morgan has an entry at Wikipedia, available at:
https://en.wikipedia.org/wiki/Darin_Morgan

Sorry, we don't currently have a Facebook page listed for Darin Morgan.

Darin Morgan worked on the following 27 episode/s of Millennium: