A Millennium profile listing all episodes and seasons on which David Nutter contributed. The main crew members have summaries and biographies where available, and we continue to add and update profile content regulary.

Sorry, there are currently no Millennium related interviews with David Nutter, however we do have many other Cast and Crew interviews which you may find of interest.

This profile has been viewed 14803 times. 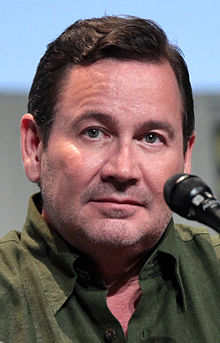 David Nutter (born 1960) is an American television and film director and television producer. He is best known for directing pilot episodes for television. In 2015, he received a Primetime Emmy Award for Outstanding Directing for a Drama Series, for his work on the HBO series, Game of Thrones.

Nutter was born in 1960. He graduated from Dunedin High School in Dunedin, Florida, in 1978. He subsequently graduated from the University of Miami, where he originally enrolled as a music major.

David Nutter's big break came in 1993, when he began directing episodes of The X-Files. From there he would go on to direct the pilot, and help with the creation of, Space: Above and Beyond, Millennium, Sleepwalkers, Roswell, Dark Angel, Smallville, Tarzan, Without a Trace, Dr. Vegas, Jack & Bobby, Supernatural, Traveler, Terminator: The Sarah Connor Chronicles, The Mentalist and Shameless.

He also directed Replacements, the fourth part of the mini-series Band of Brothers, and shared in that series's Emmy Award for Outstanding Directing for a Miniseries, Movie or a Dramatic Special. Other directing highlights include Join the Club, an Emmy-nominated episode of The Sopranos, and the 1998 feature film Disturbing Behavior.

Nutter directed episodes of the HBO series Entourage, including The Resurrection, The Prince's Bride and the series finale, The End.

In 2008, LG used Nutter's pilot expertise to create a campaign for its new Scarlet line of HDTVs, by creating a promotional clip in the style of a trailer for a TV pilot.

In 2011, Nutter directed the pilot of Rina Mimoun's The Doctor for CBS.

In 2012, Nutter directed episodes six and seven of Game of Thrones season 2. In 2013, he directed the last two episodes of season 3, including The Rains of Castamere, with the infamous Red Wedding scene.

Nutter also directed the pilot of The CW series Arrow, based on the comic-book character Green Arrow, starring Stephen Amell.

In 2014, he returned to the HBO series Game of Thrones to direct episodes 9 and 10 of Season 5. For episode 10, he received a Primetime Emmy Award for Outstanding Directing for a Drama Series.

Nutter has been married to his wife, Birgit, since May, 1987. They have two children, actress Zoe K. Nutter and Ben Nutter.

Profile text courtesy of Wikipedia, the free encyclopaedia and IMDB.com.

David Nutter was a member of the Millennium crew.

David Nutter has an entry at the Internet Movie Database, available at:
https://www.imdb.com/name/nm0638354/

David Nutter has an entry at Wikipedia, available at:
https://en.wikipedia.org/wiki/David_Nutter

Sorry, we don't currently have a Facebook page listed for David Nutter.

David Nutter worked on the following 5 episode/s of Millennium: