A Millennium cast profile of April Telek, listing all episodes and seasons in which April Telek appeared. The main cast and guest stars of Chris Carter's Millennium have summaries, trivia and biographies where available.

Sorry, there are currently no Millennium related interviews with April Telek, however we do have many other Cast and Crew interviews which you may find of interest.

This profile has been viewed 12011 times. 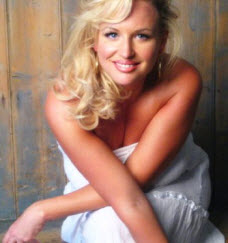 April Amber Telek (born April 29, 1975) is a Turkish-Canadian actress. She was born and raised on the North Shore of Vancouver, British Columbia. In Japan she pursued her modeling career and wins a Shiseido Cosmetics contract for Asia from 1989-1990. In April 1994 she won the title of Miss Canada and represented Canada in several International pageants. She is best known for her act portraying Denise as George Lopez's Mr. Troop Mom.

April Telek was a member of Millennium's cast.

An official website for April Telek is available at:
http://www.apriltelek.com/

An official Twitter page for April Telek is available at:
https://twitter.com/TELEKTRA

April Telek has an entry at the Internet Movie Database, available at:
https://www.imdb.com/name/nm0854304/

April Telek has an entry at Wikipedia, available at:
https://en.wikipedia.org/wiki/April_Telek

Sorry, we don't currently have a Facebook page listed for April Telek.

April Telek appeared in the following 2 episode/s of Millennium: