A Millennium profile listing all episodes and seasons on which Robert McLachlan contributed. The main crew members have summaries and biographies where available, and we continue to add and update profile content regulary.

Sorry, there are currently no Millennium related interviews with Robert McLachlan, however we do have many other Cast and Crew interviews which you may find of interest.

This profile has been viewed 4259 times. 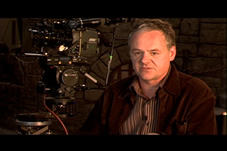 Born in San Francisco but raised in Vancouver, Canada, Robert McLachlan is the son of an artist and avid photography enthusiast. "I grew up around images," McLachlan recalls. "Probably the best piece of advice that my father gave to me was that it really didn't matter what I did in life as long as it was something I loved. I loved photography, but I wasn't sure there was a way to make a living at it!"

While attending university in Vancouver, a short documentary that McLachlan photographed gained enough attention that companies came to him to shoot their industrial films. With a fellow film student, McLachlan formed a small company to produce these industrial films as well as TV commercials and documentaries.

In the late 1980s, the filmmaker came to realize he was spending too much of his life as a businessman and not enough time doing what he loved -- photography. So he left most of the business to his partner and ventured out to create images. McLachlan received his first small break shooting the adventure series Beach Combers and then applied his newly found aquatic experience to the CBS telefilm Adrift. That, in turn, led the cinematographer to the Stephen J. Cannell ABC series The Commish and then to Fox's series Strange Luck which caught the eye of The X-Files creator, Chris Carter.

Carter invited McLachlan to join the team of Millennium during which time he met X-Files scribes Glen Morgan and James Wong. McLachlan formed a tightly knit relationship with the duo, who brought him along to shoot his first studio feature, the hit Final Destination.

In 2001, McLachlan shot Morgan and Wong's next endeavour, The One starring Jet Li.

Robert was director of photography on the second unit on The Golden Compass aka His Dark Materials: Northern Lights (UK) (2007)

Robert McLachlan was a member of the Millennium crew.

An official website for Robert McLachlan is available at:
http://www.robertmclachlan.com/index.html

Robert McLachlan has an entry at the Internet Movie Database, available at:
https://www.imdb.com/name/nm0572123/

Sorry, we don't currently have a Wikipedia entry listed for Robert McLachlan.

Sorry, we don't currently have a Facebook page listed for Robert McLachlan.

Robert McLachlan worked on the following 65 episode/s of Millennium: