This page is an introduction to X whose music was used during the Millennium episode 522666. A complete list of all music by X that was used throughout Millennium is also listed below.

Welcome Frank.
There are 36 days remaining.

This music profile has been viewed 6379 times.

A mad bomber terrorizes Washington DC in the hopes of becoming a glorified hero, bombing buildings before then rushing in to save the victims. Frank Black joins a specialized FBI team to help catch the madman whose attention-starved personality may be the key to his undoing.

There are a total of 85 images for 522666 which are available in our Episode Image Gallery.

Music by X used in the Millennium episode 522666 X were the quintessential L.A. punk rockers before they grew into a world-class rock & roll band and live band; however, enthusiasm for their unique, intelligent and humorous work never quite reached critical mass.

The Millennium episode 522666 contains the following music by X:

Music from X was used in a total of 1 episode/s of Millennium. Below is a complete list of all music by X heard throughout the series and the episodes in which it was used, including links to the relevant music and episode profiles:

Formed in 1977 after songwriter and bassist John Doe (b. Feb. 24, 1956) met (and later married) Exene Cervenka (b. Feb. 1, 1956) at a Venice poetry workshop, with rockabilly veteran Billy Zoom (b. Feb. 20, 194?) on guitar and D.J. Bonebrake (b. Dec. 8, 1955) on drums, the band garnered an immediate following. "Discovered" by ex-Doors keyboardist Ray Manzarek, he took the band into the studio for the recording of Los Angeles in 1980. It was curious, at a time when punks were supposed to hate hippies, that X's merging with an ex-Door was not only tolerated, but earned them stature as California's preeminent punk band when the record earned across-the-board raves. 1981 saw the release of the similarly punked-up Wild Gift, while their 1982 album, Under the Big Black Sun, began what would be a long career in merging hard rock, country and folk into their fiery mix. The band successfully began to mix in their populist politics with an eye toward matters of the heart.

As the band began to reach wider audiences, both Doe and Cervenka enjoyed outside careers in the arts -- he as an actor in films like Great Balls of Fire and Roadside Prophets, and she as a poet and spoken-word artist, collaborating with Lydia Lunch and Wanda Coleman.

In 1983, the rootsy songs on More Fun in the New World lent themselves to acoustic performances which the band had taken to trying live. They took it one step further on their side project, the Knitters (with Dave Alvin) which yielded one Slash album, Poor Little Critter in the Road, in 1985. Ain't Love Grand was a harder rock album in 1986 and was followed by Zoom's departure. He was momentarily replaced by Alvin, but for recording purposes, the band recruited Tony Gilkyson (formerly of Lone Justice) for See How We Are, the band's most decidedly hard-rock record in the catalog. Gilkyson stayed for the recording Live at the Whisky A Go-Go in 1988 before the band took some much-needed time off, although they never broke up. In the interim, Doe and Cervenka had since divorced, and the pair continued to work as solo artists, releasing Cervenka's Old Wives Tales (Rhino, 1989) and Running Sacred (1990) and Doe's Meet John Doe for Geffen in 1990.

By 1993, the band got together for the recording of Hey Zeus!, a collection of new songs, but the response was underwhelming, and it was back to solo work. Doe released Kissingsohard for Rhino in 1995. Exene also released Surface to Air Serpents for the 2.13.61 label, as well as a reading of the Unabomber Manifesto, after changing her name to Cervenkova. During their frequent hiatuses, X would occasionally appear in Los Angeles and San Francisco and during one stay, recorded a live album in San Francisco in 1995, Unclogged, and self-released it. Cervenkova's latest project is Auntie Christ with Bonebrake and Matt Freeman of Rancid. Gilkyson also works as a solo artist. X also appeared in three films: Penelope Spheeris' punk documentary The Decline of Western Civilization, Urgh! A Music War, and a documentary of their lives and times, The Unheard Music. Beginning in 1998, founding member Billy Zoom returned to the fold for a series of on-again/off-again shows and limited touring; a pair of 2004 Los Angeles concerts were recorded and videotaped for Live in Los Angeles, released both as an audio CD and video DVD in the spring of 2005.

Best known as the singer for X, one of the leaders of the late-'70s/early-'80s California punk explosion, Exene Cervenka has also issued solo albums, launched several side bands, and penned books. Although Cervenka has been closely associated with California for a long time, she is not originally from the West Coast. Born on February 1, 1956, in Chicago, Christine Cervenka grew up primarily in Tallahassee, FL, before relocating to Santa Monica, CA, during the summer of 1976. Through a local poetry workshop, Cervenka met John Doe, and the seeds of what would eventually become X were planted. With both sharing vocal duties (and Doe doubling on bass), Doe's friend Billy Zoom supplied guitar in a Duane Eddy style and was soon followed by the arrival of drummer D.J. Bonebrake, resulting in the birth of X in 1977.

With Cervenka changing the spelling of her first name to Exene, the group led the Hollywood punk movement, but there was much more to their sound than the average punk band -- as country, rockabilly, and Exene's poetic lyrics set them apart from the pack. A string of classic (yet criminally overlooked) releases followed -- 1980's Los Angeles, 1981's Wild Gift, 1982's Under the Big Black Sun, and 1983's More Fun in the New World -- during which time Cervenka and Doe were married. In addition to her X duties, Cervenka appeared as part of the country spinoff the Knitters (1985's Poor Little Critter on the Road), and issued (also in 1985) a poetry collaboration with Wanda Coleman entitled Twin Sisters. But as the '80s wore on, Cervenka and Doe's marriage would collapse, as did X after Zoom's exit and a few spotty albums. With X winding down, Cervenka launched a solo career, resulting in 1989's Old Wives' Tales and 1990's Running Sacred.

After a break early in the decade, Cervenka, Doe, and Bonebrake resuscitated X in the early '90s with a new studio album, 1993's Hey Zeus!, and 1995's acoustic affair, Unclogged. Later in the decade, Zoom signed back on, resulting in a re-formation of the original X lineup (no new studio recordings surfaced, however, just live dates). During this time, Cervenka found the time to launch a new albeit short-lived band, Auntie Christ (in which she also supplied guitar), including X bandmate Bonebrake as well as major X fan Rancid bassist Matt Freeman -- and also issued a third solo release, 1996's Surface to Air Serpents.

The early 21st century saw the formation of another musical side project for Exene, the Original Sinners. Additionally, Cervenka has issued several books, including the titles Virtual Unreality (through Henry Rollins' 2.13.61 publishing company), A Beer on Every Page, and Just Another War, the latter of which was a collaboration with Pulitzer Prize-nominated photojournalist Kenneth Jarecke, in which Exene supplied commentary to Jarecke's photos of the Gulf War. The Knitters resurfaced in 2005 with The Modern Sounds of the Knitters, and the following year Cervenka released the solo album Sev7en.

By Denise Sullivan / All Music Guide.


Song 1: I Must Not Think Bad Thoughts 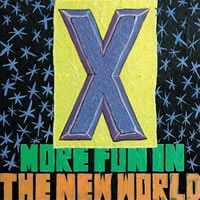 Scene:
I Must Not Think Bad Thoughts can be heard during the following scenes in the Millennium episode 522666:

Heard in the opening episode teaser, inside a crowded pub. The song is playing in the background as various patrons sit at the bar, tables or booths - laughing, talking and enjoying their drinks. Waitresses move about taking orders and delivering drinks.

More Fun in the New World is the fourth album by the band X. It was re-issued with four bonus tracks by Rhino Records in 2002.

Listen to I Must Not Think Bad Thoughts

The following video clip relates to I Must Not Think Bad Thoughts by X:


Lyrics for I Must Not Think Bad Thoughts:

The following lyrics are the property of the respective authors, artists and labels. The lyrics to I Must Not Think Bad Thoughts are provided for educational and research purposes only. Please support X by purchasing relevant CD's or legal music downloads.


The facts we hate: we'll never meet.
Walking down the road.
Everybody yelling "hurry up!" "hurry up!"
But I'm waiting for you, I must go slow.
I must not think bad thoughts.

When is this world coming to?
Both sides are right but both sides murder.
I give up; why can't they?
I must not think bad thoughts.

The civil wars and the uncivilized wars.
Conflagrations leap out of every
poor furnace.
The food cooks poorly and everyone goes hungry.
From then on it's dog eat dog,
dog eat body, & body eat dog.

I can't go down there. I can't understand it.
I'm a no good coward & an American too.
A north American, that is not a south
or a central. Or a native American.
Oh I must not think bad thoughts.

I'm guilty of murder of innocent men,
innocent women, innocent children,
thousands of them!
My planes, my guns, my money, my soldiers, my blood on my
hands, it's all my fault!

Glitter-disco-synthesizer night school.
All this noble savage drum, drum, drum.
Astronauts going back in time to hang
out with the cave people.
It's about time, it's about space. It's about
some people in the strangest place.
Woody Guthrie sang about b-e-e-t-s
not b-e-a-t-s.

The following other websites are listed for X: