This music profile has been viewed 8670 times.

When Jordan tries to get Catherine involved in helping a mysterious and beautiful woman rescued from the sea, Frank decides he should have a talk with the stranger. The exchange they have does a number on Frank's mental state as he lapses into a confusing realization of what his life would be like without the Millennium Group. Is this enlightenment a good thing, seeing as four other men have died as a result of this woman and her strange spell?

There are a total of 100 images for Siren which are available in our Episode Image Gallery.

Music by The Peking Opera used in the Millennium episode Siren Beijing or Peking opera is a kind of Chinese opera which arose in the mid-19th century and was extremely popular in the Qing Dynasty court. It is widely regarded as one of the cultural treasures of China. Beijing and Tianjin are respected as the base cities of Peking opera in the north while Shanghai is the base in the south.


Where The Peking Opera can be heard in Siren

The Millennium episode Siren contains the following music by The Peking Opera:

Music from The Peking Opera was used in a total of 1 episode/s of Millennium. Below is a complete list of all music by The Peking Opera heard throughout the series and the episodes in which it was used, including links to the relevant music and episode profiles:

About The Peking Opera

Although it is called Beijing opera, its origins are in the Chinese provinces of Anhui and Hubei. Beijing opera's two main melodies; Xipi and Erhuang originated from Anhui and Hubei operas. Much dialogue is also carried out in an archaic dialect originating partially from those regions. It also absorbed music and arias from other operas and musical arts such as the historic Qinqiang as well as being very strongly influenced by Kunqu, the form that preceded it as court art. It is regarded that Beijing opera was born when the Four Great Anhui Troupes came to Beijing in 1790. Beijing opera was originally staged for the court and came into the public later. In 1828, some famous Hubei troupes came to Beijing. They often jointly performed in the stage with Anhui troupes. The combination gradually formed Beijing opera's main melodies.

Modern live productions for tourists include English language displays of the text, useful for those unfamiliar with the classic stories.


Song 1: The Forest on Fire 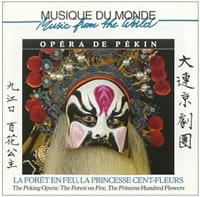 Listen to The Forest on Fire

The following video clip relates to The Forest on Fire by The Peking Opera:

The following other websites are listed for The Peking Opera: