This page is an introduction to Steve Goodman whose music was used during the Millennium episode The Judge. A complete list of all music by Steve Goodman that was used throughout Millennium is also listed below.

This music profile has been viewed 7155 times.

A man who calls himself the Judge is the mastermind behind a number of bizarre murders involving dismemberment, leading aimless young men to kill those he commands must die. His purpose is the meting out of personal justice and his primary interests come to lie in the unique drive and talent of Frank Black.

Still images from The Judge

There are a total of 115 images for The Judge which are available in our Episode Image Gallery.

Music by Steve Goodman used in the Millennium episode The Judge 
Where Steve Goodman can be heard in The Judge

The Millennium episode The Judge contains the following music by Steve Goodman:

Music from Steve Goodman was used in a total of 1 episode/s of Millennium. Below is a complete list of all music by Steve Goodman heard throughout the series and the episodes in which it was used, including links to the relevant music and episode profiles:

Born on Chicago's North Side to a middle-class Jewish family, Goodman began writing and performing songs as a teenager, after his family had moved to the near north suburbs. While a student at Maine East High School in Park Ridge, from which he graduated in 1968, Goodman began performing in Old Town and attracted a following. By 1969, after a brief sojourn in New York City's Washington Square, Goodman was a regular performer at the well-known Earl of Old Town folk music club in Chicago, while attending Lake Forest College. During this time Goodman married Nancy Pruter and paid bills by writing advertising jingles.

It was also in 1969 that Goodman was diagnosed with leukemia, the disease that would be present during the entirety of his recording career until his death in 1984. Though he experienced periods of remission, Goodman never felt that he was living on anything other than borrowed time, and some critics, listeners and friends have said that his music reflects this sentiment. His wife, writing in the liner notes to the posthumous collection No Big Surprise, characterized him in the following way:

"Basically, Steve was exactly who he appeared to be: an ambitious, well-adjusted man from a loving, middle-class Jewish home in the Chicago suburbs, whose life and talent were directed by the physical pain and time constraints of a fatal disease which he kept at bay, at times, seemingly by willpower alone . . . Steve wanted to live as normal a life as possible, only he had to live it as fast as he could . . . He extracted meaning from the mundane."

Goodman's songs first appeared on a locally-produced record, Gathering at The Earl of Old Town, in 1971. Goodman performed at The Earl dozens of times. He also remained closely involved with Chicago's Old Town School of Folk Music, where he met and mentored his good friend, John Prine.

Later in 1971, Goodman was playing at a Chicago bar called the Quiet Knight as the opening act for Kris Kristofferson. Kristofferson, impressed with Goodman, introduced him to Paul Anka, who brought Goodman to New York to record some demos. These resulted in Goodman signing a contract with Buddah Records.

All this time, Goodman had been busy writing many of his most enduring songs, and this avid songwriting would lead to an important break for him. While at the Quiet Knight, Goodman saw Arlo Guthrie, and asked to be allowed to play a song for him. Guthrie grudgingly agreed, on the condition that Goodman buy him a beer first; Guthrie would listen to Goodman for as long as it took Guthrie to drink the beer. Goodman played "City of New Orleans," (original lyrics) which Guthrie liked enough that he asked for the right to record it. Guthrie's version of the song became a hit in 1972, and provided Goodman with enough financial and artistic success to make his music a full-time career. The song would become an American standard, covered by such musicians as Johnny Cash, Judy Collins, and Willie Nelson, whose recording earned Goodman a posthumous Grammy Award for Best Country Song in 1984. For a song that (according to his wife) began as Goodman in his imagination wandered all the way to New Orleans while on a train from Chicago to visit her elderly grandmother in Mattoon, Illinois, it has itself taken quite a ride.

In 1974, singer David Allen Coe achieved considerable success on the country charts with Goodman's and John Prine's "You Never Even Call Me By My Name", a song which good-naturedly spoofed stereotypical country music lyrics.

Goodman's success as a recording artist was more limited. Although known in folk circles as an excellent and influential song writer, his albums received more critical than commercial success. Ironically, one of Goodman's biggest hits was a song he didn't write - The Dutchman, written by Michael Peter Smith.

During the mid- and late-seventies, Goodman became a regular guest on Easter Day on Vin Scelsa's radio show in New York City. Scelsa's personal recordings of these sessions eventually led to an album of selections from these appearances, The Easter Tapes.

Goodman wrote and performed many humorous songs about Chicago, including two about the Chicago Cubs: "A Dying Cub Fan's Last Request" and "Go, Cubs, Go" (which has frequently been played on Cubs' broadcasts.) The Cubs songs grew out of his fanatical devotion to the team, which included many clubhouse and on-field visits with Cub players. Other songs about Chicago included "The Lincoln Park Pirates", about the notorious Lincoln Towing Company, and "Daley's Gone," about Mayor Richard J. Daley. Another comic highlight is "Vegematic," about a man who falls asleep while watching late-night TV and dreams he ordered a slew of products he saw on infomercials. He could also write serious songs, most notably "My Old Man," a tribute to Goodman's father, Bud Goodman, a used car salesman.

On September 20, 1984, Goodman died at University of Washington Hospital in Seattle, Washington , his life finally taken by the leukemia from which he had anointed himself with the tongue-in-cheek nickname "Cool Hand Leuk" (others included "Chicago Shorty" and "The Little Prince"). He was only 36. Eleven days later, the Chicago Cubs played their first playoff game since 1945. Goodman's ashes are buried under home plate at Wrigley Field, the home of the Chicago Cubs. He is survived by his wife and three daughters. 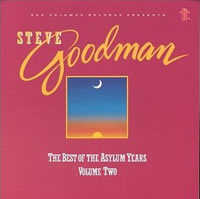 Scene:
Danger can be heard during the following scenes in the Millennium episode The Judge:

Heard as background music in the bar called the 'Tittle Tattle Room', when The Judge enters and introduces himself to Mike Bardale.

The following video clip relates to Danger by Steve Goodman:

The following lyrics are the property of the respective authors, artists and labels. The lyrics to Danger are provided for educational and research purposes only. Please support Steve Goodman by purchasing relevant CD's or legal music downloads.

Danger; will they find it?
Orphans of the open road
Chips on their shoulders
Just a little colder than danger
Underneath the moon

She knew that they couldn't last
Out beyond the edge of; fingers on
The ledge above danger
Underneath the moon

Danger; will they find it?
At night they ride the open road
Phantoms of disaster: just a little faster
Than danger underneath the moon

Danger ... and he asked her
Baby are you livin' for love?
Are you dyin' for danger?
Sittin' on a keg of dynamite everynight

An official website for Steve Goodman is listed at:

The following other websites are listed for Steve Goodman: