This page is an introduction to Huun-Huur-Tu whose music was used during the Millennium episode Bardo Thodol. A complete list of all music by Huun-Huur-Tu that was used throughout Millennium is also listed below.

This music profile has been viewed 10994 times.

The discovery of a cooler full of living hands draws Emma Hollis' attention to mysterious research conducted by former Millennium Group member Dr. Steven Takahashi, a man now afflicted by a disfiguring and deadly disease. These secrets leave one murderous Millennium Group operative desperate to kill Takahashi as Frank Black holds watch by his bedside. Emma engages in a desperate attempt to lash out at the Group with the knowledge she's gained, hoping to prove she can do so on her own.

There are a total of 155 images for Bardo Thodol which are available in our Episode Image Gallery. Huun-Huur-Tu is a music group from Tuva, a Russian republic situated on the Mongolian border.

One of the distinctive elements of their music is throat singing. Instruments they use in their music include the igil, khomus, doshpuluur, tungur (shaman drum), and others.


Where Huun-Huur-Tu can be heard in Bardo Thodol

Music from Huun-Huur-Tu was used in a total of 1 episode/s of Millennium. Below is a complete list of all music by Huun-Huur-Tu heard throughout the series and the episodes in which it was used, including links to the relevant music and episode profiles:

The xöömei quartet Kungurtuk was founded in 1992 by Kaigal-ool Khovalyg, brothers Alexander and Sayan Bapa, and Albert Kuvezin. Not long afterwards, the group changed its name to Huun-Huur-Tu, meaning "sunbeams" (lit. sun propeller). The focus of their music was traditional Tuvan folk songs, frequently featuring imagery of the Tuvan steppe or of horses.

The ensemble released its first album, 60 Horses In My Herd, the following year. The album was recorded at studios in London and Mill Valley, California. By the time recording began for the follow-up, Kuvezin had left the band to form the more rock-oriented Yat-Kha. Kuvezin was replaced by Anatoli Kuular, who had previously worked with Khovalyg and Kongar-ool Ondar as part of the Tuva Ensemble. The new line-up recorded The Orphan's Lament in New York City and Moscow, and released it in 1994.

In 1995, Alexander Bapa, who had produced the first two albums, departed the band to pursue production as a full-time career. He was replaced by Alexei Saryglar, formerly a member of the Russian state ensemble Siberian Souvenir. A third album, If I'd Been Born An Eagle, recorded in the Netherlands, followed in 1997. This time, in addition to the traditional folk music, the group performed some rather more contemporary Tuvan songs, from the latter half of the 20th century.

In early 1999, the band released its fourth album, Where Young Grass Grows. For the first time on a Huun-Huur-Tu album, non-Tuvan instruments (except for the guitar) were featured, including harp, tabla, Scottish smallpipe (performed by Martyn Bennett) and synthesiser. The album also features two excerpts of recordings made of Kaigal-ool and Anatoli singing whilst riding horseback on the Tuvan grasslands.

Huun-Huur-Tu participated in the 2000 BBC Music Live event, performing the opening and closing songs for a live, early morning broadcast from Snape Maltings. The following year, the band released their first live album.

In 2003, Kuular quit the band and was replaced by Andrey Mongush, an experienced teacher of xöömei and Tuvan instruments. 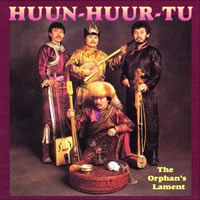 Scene:
Prayer can be heard during the following scenes in the Millennium episode Bardo Thodol:

Heard as the chanting from the Buddhist Monks.

The following video clip relates to Prayer by Huun-Huur-Tu:

Sorry, we do not currently have any other stored websites for Huun-Huur-Tu. If you are aware of a quality website for this artist, please contact us and we'll add it to this page.