This page is an introduction to Dean Martin whose music was used during the Millennium episode The Curse of Frank Black. A complete list of all music by Dean Martin that was used throughout Millennium is also listed below.

This music profile has been viewed 19917 times.

Still images from The Curse of Frank Black

There are a total of 145 images for The Curse of Frank Black which are available in our Episode Image Gallery. 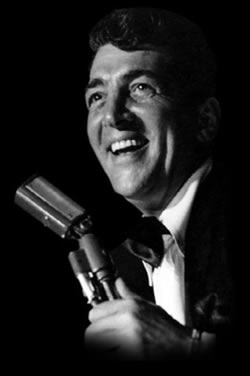 His hit singles included songs such as; "Memories Are Made Of This", "That's Amore", "Everybody Loves Somebody", "Mambo Italiano", "Sway", "Volare", "Let Me Go Lover" and others.

The Millennium episode The Curse of Frank Black contains the following music by Dean Martin:

Music from Dean Martin was used in a total of 1 episode/s of Millennium. Below is a complete list of all music by Dean Martin heard throughout the series and the episodes in which it was used, including links to the relevant music and episode profiles:

Dean Martin was born in the West Virginia-Ohio border-town of Steubenville, Ohio in the Pittsburgh Tri-State region. His parents were Italian-born barber, Gaetano Crocetti, and his wife, Angela. He spoke only Italian until age five. The traces of Italian are perhaps what lent a certain Southern drawl to Martin's speaking voice, which led many who did not know he hailed from Ohio to assume he came from the South.

Martin dropped out of school in the tenth grade and took a string of odd jobs ranging from steelworker to bootlegger. At the age of 15, he was a boxer who billed himself as "Kid Crocett" (Kro-Shey). From his prizefighting years, Martin earned a broken nose (later fixed), a permanently split lip, and many sets of broken knuckles (as a result of not being able to afford the tape used to wrap boxers' hands). Martin won almost all of his matches; however, the prize money was meager.

Eventually, Martin gave up boxing to pursue more lucrative opportunities. For a time, he worked as a roulette stickman and croupier in an illegal casino located behind a tobacco shop where he had started out as a stock boy. At the same time, he sang with local bands. Billing himself as "Dino Martini" (after the then-famous Metropolitan Opera tenor, Nino Martini), he got his first break working for the Ernie McKay Orchestra, performing in a crooning style heavily influenced by Bing Crosby and the Mills Brothers, among others. In the early 1940s, he started singing for bandleader, Sammy Watkins, at which time he changed his name to Dean Martin.

In 1941, Martin married Betty McDonald, and during their marriage (ended by divorce in 1949), they had four children. With Betty and children in tow, Martin worked for various bands throughout the early 1940s, scoring more on looks and personality than vocal ability - at least until he developed his own smooth singing style. Martin famously flopped at the Riobomba when he succeeded Frank Sinatra there in 1943, but it was the fortuitous setting for the two men's introduction.

Although Martin worked more or less steadily (when club gigs were lacking, he drove a cab), money was often scarce, and while he sent money to Betty and their growing family, Martin often lived beyond his means - gambling, buying tailored suits, having cosmetic surgery on his nose, and entertaining lady friends. To earn extra money, Martin repeatedly sold 10% shares of his earnings for upfront cash stakes. Martin apparently did this so often, he quickly found he had sold over 100% of his net worth. Such was the power of Martin's charm that most of his lenders forgave his debts and continued to be his friends.

After being drafted into the United States Army and serving a stateside year (1944-45) in Akron, Ohio, during World War II, Martin was classified 4-F and was discharged. By 1946, Martin was doing relatively well, but he was still little more than an East Coast nightclub singer with an all-too-common style, similar to that of Bing Crosby. While he could draw respectable audiences to the clubs he played, he inspired none of fanatic popularity enjoyed by Sinatra.

Dean Martin was a member of the The Rat Pack, the nickname given to a group of popular entertainers most active between the mid-1950s and mid-1960s. Its most famous line-up featured Frank Sinatra, Dean Martin, Sammy Davis Jr., Peter Lawford and Joey Bishop, who appeared together in films and on stage in the early 1960s. Despite its reputation as a masculine group of people, the Rat Pack did have female participants, such as movie icons Shirley MacLaine, Lauren Bacall, and Judy Garland.

The name "Rat Pack" was first used to refer to a group of friends in Hollywood first informally organized around Humphrey Bogart, a group that included the young Frank Sinatra. The term "Rat Pack" was supposedly assigned to the original Bogart group by "Den Mother" Lauren Bacall, after seeing them return from a night in Las Vegas, she being the youngest of them all and seeing them to be tired and worn out said words to the effect of "You look like a goddamn rat pack", referring to the tired and haggard appearance of the other members of the group. According to another explanation, the term, "Rat Pack" was not Bacall's idea at all. It had started with Humphrey Bogart, Bacall's husband and frequent film co-star and a pal of Sinatra's, who named a group of his drinking buddies the Holmby Hills Rat Pack, after the location of one of Judy Garland and her husband Sid Luft's houses (a frequent hangout). Yet another explanation has it that the name referred to the way that an established pack of rats will belligerently reject an outsider who tries to join them.

The 1960s version of the group included Frank Sinatra, Dean Martin, Sammy Davis, Jr., Joey Bishop, and Peter Lawford, brother-in-law of John F. Kennedy, then a Massachusetts senator who was destined for the White House. Angie Dickinson, Juliet Prowse, and Shirley MacLaine were often referred to as the "Rat Pack Mascots", a title which made these ladies feel like "one of the boys". The post-Bogart version of the group was reportedly never called that name by any of its members - they called it the Summit or the Clan. "The Rat Pack" was a term used by journalists and outsiders, although it remains the lasting name for the group.

As a result of Lawford's relation to Kennedy and Sinatra's connections to the Mafia, and the role the group played in campaigning for Kennedy and the Democrats, the Rat Pack had not only influence in entertainment and social circles but some influence politically as well. Sinatra expected that he would be part of Kennedy's circle after the election but was excluded, which in turn led to Peter Lawford's exclusion from the group after 1962. Lawford's role in Robin and the Seven Hoods was given to Bing Crosby and spiced up with several songs. (It wasn't the first time Sinatra had treated a Rat Packer that way; Davis's role in Never So Few was given to Steve McQueen when Sinatra and Davis had a temporary falling-out.)

The Rat Pack often performed in Las Vegas, Nevada and were instrumental in the rise of Las Vegas as a popular entertainment destination. They played an important role in the desegregation of Las Vegas hotels and casinos in the early 1960s. Sinatra and the others would refuse to play in or patronize those establishments that would not give full service to African American entertainers including Davis. Once Rat Pack appearances became popular and the subject of media attention, the Las Vegas properties were forced to abandon segregation-based policies.

Sinatra and friends had no idea this band of five would make entertainment history. The group was remarkable for its upbeat entertainment style and smooth musical and comedy routines, many of which were ad-libbed. Davis said when Sinatra called the initial gathering of the Rat Pack, U.S. President Dwight D. Eisenhower, French President Charles de Gaulle, and Soviet leader Nikita Khrushchev were planning a Paris Summit Conference. Not to be outdone, Sinatra observed, "We'll have our own little Summit meeting." The Vegas Summit did not draw diplomats, but it did draw high rollers, VIPs, celebrities, and entertainment buffs, who responded by the thousands.

Often, when one of the members was scheduled to give a performance, the rest of the Pack would show up for an impromptu show, causing much excitement amongst audiences, and return visits. They sold out almost all of their appearances, and people would come pouring into Las Vegas, sometimes sleeping in cars and hotel lobbies when they could not find rooms, just to be part of the Rat Pack's entertainment experience. The marquees of the hotels at which they were performing as individuals might read "DEAN MARTIN - MAYBE FRANK - MAYBE SAMMY."

In 1987 Sinatra, Davis and Martin embarked on a World Tour, entitled 'Together Again'. At press conferences Sinatra rejected the use of the term 'Rat Pack'. The tour was fraught with difficulties as Martin's son had died in a plane crash earlier that year, and he left the tour the following year, being replaced by Liza Minnelli.


Song 1: Memories are Made of This 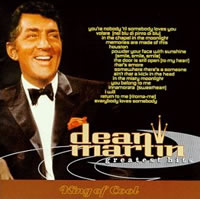 Scene:
Memories are Made of This can be heard during the following scenes in the Millennium episode The Curse of Frank Black:

Heard 20 minutes and 50 seonds into The Curse of Frank Black during Frank's memory flashback, when Frank, 14 years old, and four teenaged friends in a car stop in front of Crocell's house. Also outside the house is a Seattle police car and an ambulance.

Listen to Memories are Made of This

The following video clip relates to Memories are Made of This by Dean Martin:


Lyrics for Memories are Made of This:

The following lyrics are the property of the respective authors, artists and labels. The lyrics to Memories are Made of This are provided for educational and research purposes only. Please support Dean Martin by purchasing relevant CD's or legal music downloads.

Take one fresh and tender kiss
Add one stolen night of bliss
One girl, one boy
Some grief, some joy
Memories are made of this

The following other websites are listed for Dean Martin: