This page is an introduction to Blur whose music was used during the Millennium episode Darwin's Eye. A complete list of all music by Blur that was used throughout Millennium is also listed below.

This music profile has been viewed 10339 times.

Frank Black and Emma Hollis are forced to consider how many of their cases are truly ruled by conspiracy when a young girl, put in an asylum after being accused of murdering her parents, escapes from captivity with the help of a willing Sheriff's Deputy. Are the girl's rants regarding evolution and constant drawing of crossed palm trees a sign that there may be a more complex cover-up at work? Or is she, like Emma's ailing father, simply going mad?

Written by Patrick Harbinson
Directed by Ken Fink
Edited by Peter B. Ellis

There are a total of 225 images for Darwin's Eye which are available in our Episode Image Gallery.

Music by Blur used in the Millennium episode Darwin's Eye

Blur are an English rock band formed in Colchester in 1989. Originally named Seymour, Blur became one of the biggest bands in the UK during the Britpop movement of the mid-1990s.


Where Blur can be heard in Darwin's Eye

Music from Blur was used in a total of 1 episode/s of Millennium. Below is a complete list of all music by Blur heard throughout the series and the episodes in which it was used, including links to the relevant music and episode profiles:

Blur's original influences on their debut album, Leisure, included contemporary British alternative rock trends such as Madchester and shoegazing. Following a stylistic change in the mid-1990s, influenced by 1960s English pop groups such as The Kinks and The Beatles, the band released Modern Life is Rubbish, Parklife and The Great Escape. As a result, the band helped to popularise the Britpop genre and achieved mass popularity in the UK, aided by a famous chart battle with Britpop rivals Oasis.

By the late 1990s, with the release of their fifth album, Blur, the band underwent another reinvention, influenced by the indie rock and lo-fi style of American bands such as Pavement and R.E.M., in the process gaining an elusive American success with the single "Song 2". The final album featuring the band's original lineup, 13, found Blur experimenting with electronica and gospel music.

In 2002, founding member and guitarist Graham Coxon left the band early in recording sessions for Think Tank, the band's seventh and latest album. Blur continued in his absence, seeing both the album and a tour through. Since the end of their 2003 tour, the band has unofficially been on hiatus, as band members are working on solo projects. Although Coxon had shown no interest in rejoining Blur, in recent months he has reportedly warmed to the idea, leading unconfirmed reports of his return to Blur to surface late in 2006. 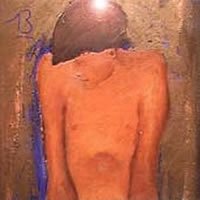 Scene:
Trimm Trabb can be heard during the following scenes in the Millennium episode Darwin's Eye:

Heard in the opening episode teaser where Cassie 'Cass' Doyle is running away to escape the Gervase Psychiatric Hospital.

The following video clip relates to Trimm Trabb by Blur:

The following lyrics are the property of the respective authors, artists and labels. The lyrics to Trimm Trabb are provided for educational and research purposes only. Please support Blur by purchasing relevant CD's or legal music downloads.

Sorry, we do not currently have any other stored websites for Blur. If you are aware of a quality website for this artist, please contact us and we'll add it to this page.