This page is an introduction to Zager & Evans whose music was used during the Millennium episode The Fourth Horseman. A complete list of all music by Zager & Evans that was used throughout Millennium is also listed below.

This music profile has been viewed 8135 times.

As Lara Means disappears under strange circumstances, Frank Black and Peter Watts come to investigate a horrible death that looks so gruesome they assume it was a foul murder. Medical science states otherwise, tossing the two into a strict quarantine procedure to investigate their exposure to a horrific doomsday virus. Frank demands answers from Peter regarding the Millennium Group’s knowledge of these events and considers joining an opposing group, The Trust, to get to the truth of the matter.

Still images from The Fourth Horseman

There are a total of 165 images for The Fourth Horseman which are available in our Episode Image Gallery. 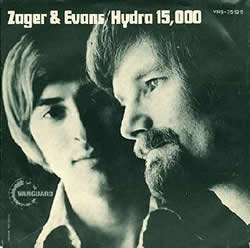 Zager and Evans were a Lincoln, Nebraska rock-pop duo of the late 1960s and early 1970s named after its two members, Denny Zager and Rick Evans. Artists Dave Trupp and Mark Dalton backed up the duo.


Where Zager & Evans can be heard in The Fourth Horseman

The Millennium episode The Fourth Horseman contains the following music by Zager & Evans:

Music from Zager & Evans was used in a total of 2 episode/s of Millennium. Below is a complete list of all music by Zager & Evans heard throughout the series and the episodes in which it was used, including links to the relevant music and episode profiles:

Zager and Evans are best known for their immensely popular "In the Year 2525", written by Rick Evans. The song warned of the dangers of technology, portraying a future in which the human race would at length be destroyed by its own technological and medical innovations and Divine wrath. The last stanza of the song intimates a continuing cycle of birth, death and rebirth of mankind.

"In the Year 2525" hit number one on the pop charts in 1969. Coincidentally, it was number one on 20 July 1969 in USA, the date of the first manned moon landing by astronauts Neil Armstrong and Buzz Aldrin. It was nominated for a special Hugo Award that same year.

The band signed with RCA records, who claimed they were "The Next Big Thing", but follow-up singles, such as "Mr. Turnkey" achieved only minor success. "In The Year 2525" was their last top 40 song. While "2525" was enjoying its high success, Billboard magazine ran an article that indicated Zager and Evans were heading for huge success in the music business and even compared them to The Beatles.

Zager became a music teacher (teaching private guitar lessons and luthier skills) and resides in Lincoln, Nebraska. He now sells EZ-Play™ modified guitars and online video guitar lessons on his website (see below). Evans went on to a solo career and continued to perform and write songs. Denny Zager and Rick Evans no longer perform as a duo, but they both remain in the music business and remain friends. 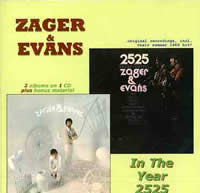 "In the Year 2525 (Exordium and Terminus)" is the title of a hit song from 1969 by the Lincoln, Nebraska duo Zager and Evans, which reached number one on the Billboard Hot 100 for six weeks, commencing July 12. The song was written by Rick Evans in 1964 and originally released on a small local record label in 1967. Two years later, an Odessa, Texas radio station popularized the disc, which RCA Records quickly picked up for nationwide distribution.

The song has no chorus. Amid ominous-sounding orchestral music, the final dated chronological verse reads In the year 9595, I'm kinda wonderin' if Man is gonna be alive. He's taken everything this old Earth can give, and he ain't put back nothing, whoa-whoa... Thus making specific an underlying environmental message of the song. The summary verse concludes: Now it's been 10,000 years, Man has cried a billion tears, For what, he never knew. Now man's reign is through. But through eternal night, The twinkling of starlight. So very far away, Maybe it was only yesterday.), before the song effectively "starts over" with the first verse again and then fades out. Thus leaving open the possibility that "we went through this before," and life is now at the start of another cycle.

The overriding theme, of a World doomed by its passive acquiescence to and overdependence on its own overdone technologies, struck a resonant cord in millions of people around the World in the 1960s.

The song is based on a nightmarish vision of the future as man's technological inventions gradually dehumanize him. The song includes a sly colloquial reference to the Rapture (In the year 7510, if God's a' coming, He ought to make it by then.) which echoed the Zeitgeist of the Jesus Movement. The song also references examples of technologies that were not fully developed but were known to the public in 1969, such as robots, as well as a future technology that would come into existence long after being prophesied in the song, the science of test tube babies and genetic selection by parents of their future children. Such a concept had been explored in a few science fiction novels but had not yet been mentioned in the mainstream media until In The Year 2525 was released in 1969.

Listen to In the Year 2525 (Exordium and Terminus)

The following video clip relates to In the Year 2525 (Exordium and Terminus) by Zager & Evans:

The following lyrics are the property of the respective authors, artists and labels. The lyrics to In the Year 2525 (Exordium and Terminus) are provided for educational and research purposes only. Please support Zager & Evans by purchasing relevant CD's or legal music downloads.

In the year 3535
Ain't gonna need to tell the truth, tell no lie
Everything you think, do and say
Is in the pill you took today

In the year 4545
You ain't gonna need your teeth, won't need your eyes
You won't find a thing to chew
Nobody's gonna look at you

In the year 7510
If God's a-coming, He oughta make it by then
Maybe He'll look around Himself and say
"Guess it's time for the judgement day"

In the year 8510
God is gonna shake His mighty head
He'll either say "I'm pleased where man has been"
Or tear it down, and start again

Now it's been ten thousand years
Man has cried a billion tears
For what, he never knew
Now man's reign is through

The following other websites are listed for Zager & Evans:

Wikipedia contributors, "In the Year 2525," Wikipedia, The Free Encyclopedia
https://en.wikipedia.org/wiki/In_the_Year_2525