This music profile has been viewed 17011 times.

Acting as swiftly as possible while the opportunity presents itself, a fundamentalist Jewish group abducts a pregnant woman, hoping to gain ownership over the woman's unborn child. They hope to fulfill biblical prophecy by raising a pure child for the new millennium, forcing it into the priesthood, and leading the second coming of the Messiah at the yet-to-be built third temple in Jerusalem. Emma Hollis suspects Millennium Group involvement in these events and is shocked when Peter Watts reaches out to her to help close the investigation.

Still images from Forcing the End

There are a total of 155 images for Forcing the End which are available in our Episode Image Gallery. 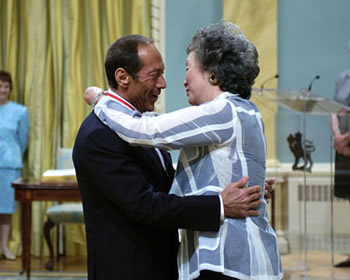 (Thanks to our forum member BetweentheLines for identifying this song.)

Paul Albert Anka, OC (born July 30, 1941, in Ottawa, Ontario) is a Canadian-American singer, songwriter and actor. He became a naturalized U.S. citizen in 1990.

Paul Anka can be seen in the photo opposite receiving the Order of Canada from Governor General Adrienne Clarkson in a ceremony performed at Rideau Hall on Friday, June 10, 2005.

Anka's parents, who owned a restaurant, were of Syrian Christian descent, and not Lebanese as some claim. He sang with the St. Elijah Syrian Antiochian Orthodox Church choir under the direction of Frederick Karam, with whom he studied music theory. He also studied piano with Winnifred Rees.

Anka recorded his first single, "I Confess," at age 14. In 1957, he went to New York City where he auditioned for Don Costa at ABC, singing a lovestruck verse he had written to a former babysitter. The song, "Diana", brought Anka instant stardom as it rocketed to number one on the charts. "Diana" is one of the best selling 45s in music history. He followed up with four songs that made it into the Top 20 in 1958, making him, at 17, one of the biggest teen idols of the time. He toured Britain and then, with Buddy Holly, he toured Australia.

His talent went beyond singing, writing Buddy Holly's giant hit, "It Doesn't Matter Anymore," the theme for Johnny Carson's Tonight Show (reworked in 1962 from a song Anka wrote earlier called "Toot Sweet," which had been rewritten with lyrics and recorded by Annette Funicello in 1959 as "It's Really Love"), Tom Jones' biggest hit record, "She's A Lady", and the English lyrics for "My Way," Frank Sinatra's signature song and sung by many well known artists, including Greta Keller and Elvis Presley, for whom the words were very fitting.

In the 1960s, Anka would begin acting in motion pictures as well as writing songs for them, most notably the theme for the hit movie The Longest Day. From his movie work, he wrote and recorded his monster hit, Lonely Boy. He then went on to become one of the first pop singers to perform at the Las Vegas casinos. Anka returns to Canada several times a year, regularly playing to sold out crowds at the Fallsview Casino in Niagara Falls, Ontario.

After more than ten years without a hit record, in 1974, he teamed up with Odia Coates to record the number 1 hit, "Having My Baby." They would record two more duets that both made it into the Top 10. In 1975, he wrote a jingle for Kodak called The Times of Your Life. The jingle became so popular, he recorded it as a full song, and it became a hit a year later.

By the 1970s, Anka's career centered around adult contemporary and big-band standards, played regularly in Las Vegas. On September 6, 1990, he became a naturalized citizen of the United States. He returned to his home town to buy a part of the Ottawa Senators hockey team. In 2005, his album Rock Swings, comprising big-band arrangements of contemporary standards, provided a mainstream comeback of sorts and saw Anka awarded a star on Canada's Walk of Fame in Toronto.

In 1999, he visited Lebanon for sell-out performances at the Forum de Beyrouth (The Beirut Forum).

Paul Anka was elected to the Canadian Music Hall of Fame in 1980. He has a star on the Hollywood Walk of Fame. at 6840 Hollywood Blvd. Anka has also received a star on Canada's Walk of Fame. in 2005. In 1991, the Government of France honored him with the title "Chevalier in the Order of Arts and Letters". He was appointed an officer of the Order of Canada in 2005.

In October of 1995, he appeared in Treehouse of Horror VI on The Simpsons.

On the CW show Gilmore Girls, Lorelai named her new dog Paul Anka. He also made a guest appearance as himself in the episode "The Real Paul Anka", which aired April 11, 2006.

Paul Anka recently did a live session on Live @ The Orange Lounge playing songs from his new cover-CD Rock Swings.

Jay-Z sampled his vocals from his version of "My Way" on the track "I Did It My Way".

In a somewhat disturbing usage of his music, the title track from Put Your Head On My Shoulder appeared in the soundtrack for Hitman: Contracts.

He became infamous amongst musicians (and more recently to internet users) for a mid-1970s after-show tirade which was secretly recorded by a "snake we later fired" (Anka: Fresh Air interview). The diatribe, in which Anka berates his crew and band members, has spawned a number of in-joke references and quotations, the main ones being: "The guys get shirts", "Where's Joe?", and "Slice like a hammer." 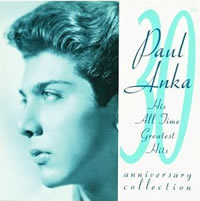 Scene:
(You're) Having My Baby can be heard during the following scenes in the Millennium episode Forcing the End:

Heard when Rachel's listening to it on the radio before getting kidnapped by the cult members.

Listen to (You're) Having My Baby

The following video clip relates to (You're) Having My Baby by Paul Anka (featuring Odia Coates):


Lyrics for (You're) Having My Baby:

The following lyrics are the property of the respective authors, artists and labels. The lyrics to (You're) Having My Baby are provided for educational and research purposes only. Please support Paul Anka (featuring Odia Coates) by purchasing relevant CD's or legal music downloads.

[Both:]
That you're havin' my baby

[Paul:]
You're the woman I love
And I love what it's doin' to ya

[Paul:]
You're a woman in love
And I love what's goin' through ya

[Paul:]
The need inside you
I see it showin'
Whoa, the seed inside ya
Baby, do you feel it growin'
Are you happy you know it
That you're

An official website for Paul Anka (featuring Odia Coates) is listed at:

Sorry, we do not currently have any other stored websites for Paul Anka (featuring Odia Coates). If you are aware of a quality website for this artist, please contact us and we'll add it to this page.